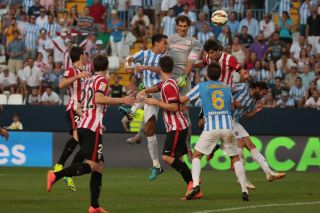 Iraizoz rose highest to powerfully head a free-kick past fellow gloveman Carlos Kameni in the fifth minute of second-half stoppage time but the goal was disallowed, seemingly for offside against Athletic defender Aymeric Laporte.

Malaga finished the match with nine players after red cards to Portuguese pair Duda and Vitorino Antunes in the closing stages but Javi Gracia's men held on to begin their new league campaign with a victory.

On-loan Liverpool attacker Luis Alberto scored the only goal of the match 10 minutes before half-time, converting the rebound after his initial penalty was saved by Iraizoz.

Malaga looked set to comfortably hold on for victory until Duda was sent off in the 88th minute for pushing Iker Muniain to the ground, while Antunes was shown a straight red card four minutes later for a two-footed challenge on Guillermo Fernandez.

With a two-man advantage, Bilbao looked to have salvaged a point in the 95th minute but the assistant referee raised his flag against Laporte, who did not look to be affecting the play as Iraizoz powered the ball into the top corner of the net.

In Almeria, malfunctioning floodlights forced the game to stop briefly during the second half, while Espanyol took advantage of the extended stoppage time afterwards to score an equaliser in a 1-1 draw.

After Fernando Soriano gave the home side the lead in the 52nd minute, finishing off Edgar Mendez's rampaging run, the lights at the Estadio de los Juegos Mediterraneos went out at one end of the pitch for over 10 minutes.

Eventually stadium officials fixed the problem and in the 103rd minute Sergio Garcia equalised for the visitors, controlling a high ball on his chest before firing low past Almeria goalkeeper Ruben with his left foot.

Sevilla were denied an opening-round victory against visiting Valencia, with Argentine defender Lucas Orban bundling home the equaliser on debut for the away team with two minutes remaining, after Aleix Vidal had given the hosts the lead before half-time in the 1-1 draw.

In the other La Liga match on Saturday, Granada came from behind at home to win 2-1 over Deportivo La Coruna.