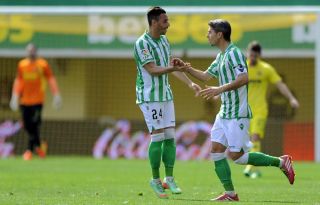 The win continued Betis' resurgence in the Spanish top flight with the Seville-based club making it eight points from five matches, although they remain five points adrift of second-last Real Valladolid, who lost 1-0 to Real Sociedad.

Levante had not won in three league matches heading into Thursday's encounter and Betis took advantage of their hosts' poor form in the 13th minute with Sevilla finishing from close range after Ruben Castro's initial shot was blocked.

Diop equalised with a blistering low shot in the 26th minute but Levante could not match Betis after half-time.

The visitors' scintillating period from the 70th minute decided the match with Molina thrashing the ball into the net from Leo Baptistao's pass before Castro tapped home a loose ball seven minutes later to give Betis a two-goal buffer.

The win took Betis to 22 points from 30 games this season but they still have plenty of work to do to escape relegation with eight rounds remaining, as they need to overhaul Valladolid (27), Getafe (28) and at least one of Osasuna (29), Almeria (30) and Elche (31).

It was a good day for Betis with Getafe and Valladolid both losing, while Almeria was the only other team in the lower reaches of the table to collect a point, coming from behind to draw 2-2 with Valencia.

Sociedad stayed in the hunt for a UEFA Europa League berth with their win over Valladolid with Mexican forward Carlos Vela scoring the only goal of the game.

The victory took Sociedad to 49 points in sixth - the second of two positions that come with an automatic spot in next season's Europa League - just one point adrift of fifth-placed Sevilla.

Villarreal ensured they kept the pressure on Sevilla and Sociedad as well, as they won 1-0 at Getafe thanks to Jeremy Perbet's goal.

In Almeria, the home side looked set for a fourth loss in five games when Valencia jumped out to a 2-0 lead by half-time.

Malian midfielder Seydou Keita scored the fastest goal in La Liga history for Valencia, bursting forward from kick-off to put pressure on Almeria and taking advantage of a short backpass from Marco Torsiglieri to side-foot the ball into the net after just 7.6 seconds.

Eduardo Vargas doubled the visitors lead in the 34th minute but two goals in as many minutes after the break saw Almeria snatch a 2-2 draw.

Oscar Diaz scored Almeria's first seven minutes into the second half, acrobatically volleying the ball into the net after Suso's long-range effort was parried by Valencia goalkeeper Guaita, while Corona notched the equaliser a minute later with a sharp finish from Fernando Soriano's through-ball.