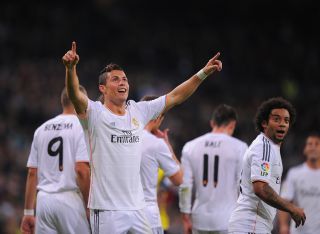 Two goals on Gareth Bale's first La Liga start at Santiago Bernabeu and a penalty from Ronaldo gave Real a 3-0 lead by the 32nd minute on Wednesday as the hosts looked to be cruising to victory.

Sevilla found another gear, however. Ivan Rakitic converted a penalty won by Diogo Figueiras in the 38th minute and the visitors capitalised on lax defending two minutes later as Carlos Bacca added a second.

Karim Benzema grabbed Real's fourth before Ronaldo scored his second of the game in the 60th minute, but there was still plenty of drama to come as Rakitic doubled his tally for the match three minutes later.

Ronaldo completed his hat-trick in the 71st minute and although he gave away a penalty, Rakitic put his effort over the crossbar before Stephane M'Bia received his second yellow card.

Benzema wrapped up the scoring with 10 minutes to go as Real won La Liga's first 10-goal match in 46 years.

Valencia's recent troubles continued as they suffered a third successive league defeat, this time losing 2-1 at the hands of last-placed Almeria.

Jonas gave Miroslav Djukic's men a 33rd-minute lead from the penalty spot before Almeria hit back.

Marco Torsiglieri equalised just after the hour mark before Aleix Vidal struck in the 70th minute to give the promoted club their first win of the season in their 11th match.

Real Valladolid came from two goals down at home to salvage a 2-2 draw and deny Real Sociedad a third consecutive domestic win.

Highly-rated French winger Antoine Griezmann broke the deadlock in the 16th minute before grabbing a second early in the second half, but the hosts turned the game on its head with two goals in two second-half minutes.

Daniel Larsson pulled one back in the 76th minute and, less than 120 seconds later, Valladolid drew level as Javi Guerra notched his sixth La Liga goal of the season to earn a point.

Ten-man Osasuna moved out of the relegation zone with a 3-1 win at home to Rayo Vallecano, who dropped into the bottom three as a result.

Oier and Oriol Riera gave Osasuna a 2-0 lead by the 13th minute, with Roberto Torres scoring his side's third of the match just before the hour mark.

Miguel de las Cuevas received a straight red card soon after and although Alex Galvez did pull one back, it was not enough as the hosts held on for the win.