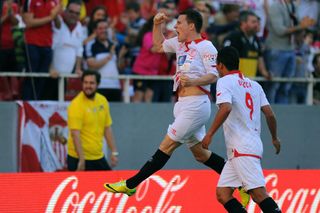 Unai Emery's side had endured a miserable week as they were beaten 1-0 at Celta Vigo last weekend and lost by the same scoreline in the first leg of their UEFA Europa League quarter-final against Porto.

But they showed no sign of being out of sorts as they saw off the Barcelona side with a ruthless display at Estadio Ramon Sanchez Pizjuan on Sunday.

French forward Kevin Gameiro netted twice after Stephane Mbia opened the scoring and Ivan Rakitic added a fourth one minute from time as Sevilla cut the gap to fourth-placed Athletic Bilbao - who have a game in hand - to three points.

Sergio Garcia's penalty two minutes into the second half gave the visitors hope, but Espanyol have now won just one of their last five.

Getafe complete the relegation places after they were consigned to a last-gasp 1-0 defeat at fellow strugglers Elche.

The Madrid outfit looked set to follow up their 3-1 win at Valencia last weekend by securing another point on the road, but substitute Richmond Boakye struck three minutes into added time to stun the visitors.

Malaga moved up to 11th after they swept aside Granada 4-1 at Estadio La Rosaleda.

Ignacio Camacho helped himself to a first-half brace and Nordin Amrabat added a third from the penalty spot before Juanmi sealed the points. Youssef El-Arabi pulled a goal back 12 minutes from time but it was too little, too late and Lucas Alcaraz's men are just three points above the drop zone.