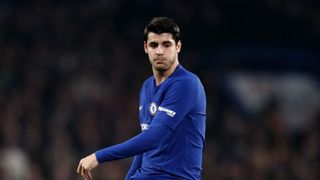 The fitness of Alvaro Morata remains a concern for Chelsea head coach Antonio Conte, who is unsure when the striker will return to action.

Morata sat out the trip to Huddersfield Town in December with a back injury and, despite returning to the line-up in the following game against Southampton, the persistence of the issue has seen him forced back to the sidelines.

Conte confirmed the Spain international will not be in the squad when the Blues look to bounce back from successive Premier League defeats to Bournemouth and Watford against West Brom on Monday.

The Chelsea boss could not provide any clarification as to when Morata will once again be available.

"We are talking a lot about bad results but sometimes we forget that we are facing a serious situation because players like Morata, that for us are very important, are missing a lot of time," said Conte, whose side also face an FA Cup fifth-round clash with Hull City and the first leg of their Champions League last-16 tie against Barcelona in the next 11 days.

"I don't know [when he'll be back] because he has this problem and we tried a lot to find a solution to solve the pain in his back.

"If you ask if me he needs one month, one day, two months, the rest of the season, I don't know. For this reason I'm a bit worried because you know very well the importance of the player."

Antonio Conte has arrived for his press conference at Cobham... February 9, 2018

Speculation over Conte's future at Stamford Bridge continues to swirl and the Italian assured that departing has not entered his thoughts, though he acknowledged there needs to be an improvement in performances.

"I'm not thinking for one moment about the possibility to go away from this club," he said.

"I repeat, my commitment is totally for this club and we are trying to do our best. But as you know very well that a lot of time – I don't agree – but a lot of time the manager or coach depends on the results.

"At this moment we are having poor results and for this reason we have to pay great attention.

"Every single player knows very well we have to try to improve, and to improve the results you have to improve and to play better than the game against Watford, because against Bournemouth we had a lot of shots, against Watford it was totally negative.