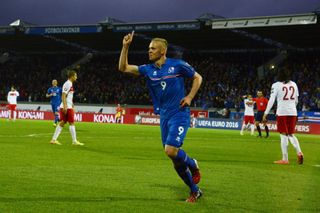 Iceland's Euro 2016 Group A qualifying campaign got off to the perfect start in Reykjavik thanks to goals from Jon Dadi Bodvarsson, Gylfi Sigurdsson and Kolbeinn Sigthorsson.

Lagerback's men, who narrowly missed out on reaching the 2014 World Cup after losing a two-legged play-off against Croatia, dominated from the outset with Bodvarsson heading home the opener in the 18th minute.

The hosts controlled proceedings from that point as Sigurdsson and Sigthorsson completed the scoring in the second half and Lagerback said the opening 45 minutes was the best he had seen since taking the reins in 2011.

"I think we had a really, really good game. I am impressed by the players, we prepared the whole week and the first half was maybe one of the best halves since I came to the team," the 66-year-old told reporters post-game.

"Then in the second half we controlled it well and were very effective, and I am very satisfied with the players."

The Swedish coach was also impressed with the defensive aspect of Iceland's game after the 41st-ranked nation kept their fifth clean sheet from their past seven fixtures on home soil.

"The most important thing when you play with an individually skilful team like Turkey is that we keep the team together when we defend and be well-organised and do not lose out in one-on-one situations," said Lagerback.

"I only remember they had one real goalscoring chance. So that is the best thing you can say about the players – it was really, really good."

Ajax forward Sigthorsson added some gloss to the scoreline with Iceland's third goal in the 77th minute - taking his tally to 16 goals in 24 international appearances.

Sigthorsson, who has scored eight goals in his past 10 matches for Iceland, said Tuesday's performance was "perfect".

"It was a great game from all of the players. We played very well for 90 minutes, I think," he said.

"First half? Great. Second half? Rock solid and with enough chances to win by more than 3-0, I think. Overall, a fantastic performance from the team.

"I think we played well against [Turkey's 3-4-3] formation. The coach said we had to stick together as a team to defend really well and it worked out very well.

"I think the performance was actually perfect - as he expected from us."