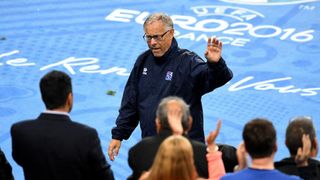 Iceland co-coach Lars Lagerback admitted he was against the expansion of the European Championship from 16 teams to 24, but he is starting to see its merits.

Alongside Heimir Hallgrimsson, Lagerback oversaw a remarkable campaign from Iceland before they bowed out of Euro 2016, the first championship with the additional teams, at the quarter-finals against hosts France, going down 5-2.

And Lagerback said he was against the idea when he first heard of plans to expand the tournament to allow more teams, but he has been convinced it is a positive.

"I was a little bit against going up to 24 teams but I'm starting to go in the other direction instead. If you look up and down international football as I have experienced it, more and more countries have players playing in good leagues," he said.

"You can always discuss that the tournament is too long with the best players playing a long season, but the PR guaranteed by these matches is really good for football.

"If you look at Europe as a unit - if you can do that with different countries stepping out of different areas - it has developed Europe as a continent for football."

And for Iceland, the money generated by the tournament will serve the country well in helping to ensure this was not a flash-in-the-pan effort, with Lagerback predicting a bright future for the national team.

"It's always tough at this level. If you look at the World Cup qualification, Iceland is in a rather tough group," he said.

"But if you look at the age of the payers in this squad the future looks really good.

"Some of the younger guys who did not play at all or very little, I think for the national team it looks really, really good.

"The clubs and the football association can use the income from this tournament to put into important football projects, like developing young players."

As for his own future - Lagerback is set to step down with Hallgrimsson taking sole control - the outgoing co-coach may stay in the game.

"I don't fancy fishing. It's difficult to say sitting here and now," he said.

"The four and a half years with Iceland has been special, the way we have developed things. Also the results, it is all about results.

"This shall always have a special place in my memories and in my heart.

"If someone wants to use me in some respect, without going 100 per cent into it [as a head coach] I will maybe look into it."