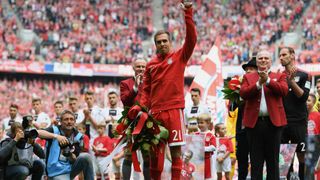 The retiring Philipp Lahm admitted to experiencing "mixed feelings" after his final match for Bayern Munich on Saturday.

The 33-year-old played 87 minutes of the champions' 4-1 victory over Freiburg in what was his 517th competitive appearance for the club.

Bayern turned their last Bundesliga match of the campaign into something of a tribute show for Lahm, as well as Xabi Alonso and Tom Starke, who are also retiring.

Past greats of the club lined up on the pitch to welcome the players, who walked out with their children as matchday mascots.

Alonso and Lahm were given special presentations before kick-off and both were substituted in the closing stages to give the Allianz Arena crowd one more chance to show their appreciation, after American pop star Anastacia had given a special half-time performance wearing a Bayern shirt with Lahm's number.

Having celebrated his 250th Bundesliga win by lifting the trophy for the eighth time, Lahm conceded that it was an emotional moment to bid farewell to the club he first joined as an 11-year-old.

"Mixed feelings. When you're celebrating for the last time with the guys there," he said after the match, before being interrupted by a shower of beer from assistant coach Hermann Gerland and team-mate David Alaba.

Continuing, Lahm said: "It's emotional. What I've experienced with the fans, the team and my friends here was for the last time.

"Being on this pitch with the team and the coaches was my life. The club is like one great community. I will miss that.

"I have experienced so many wonderful moments with everyone here. My team-mates, the fans, everyone. All the best to everyone."

You lived the dream and created joy for millions. Thank you and farewell, Captain! May 20, 2017