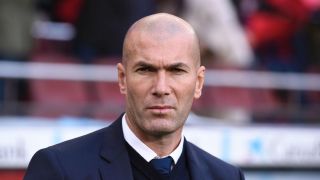 The European champions - on a club-record equalling run of 34 matches unbeaten in all competitions - have won 10 and drawn four of their 14 domestic outings in 2016-17.

That has allowed them to open a healthy lead over fierce rivals Barca, but Zidane was quick to point out that the league cannot be won as early as December.

"I don't think La Liga is decided. We're playing and happy with the results we're having lately but we know that the road is still very long," he said.

"There are plenty of games to play, lots of things we have to do to achieve what we want to achieve.

"The six-point advantage doesn't mean anything. We're ahead right now but that doesn't mean we're going to win the league."

Zidane's side are one of 16 teams who will enter the Champions League draw for the knockout stages on Monday, while their domestic duties are due to take a break shortly as they travel to Japan for the FIFA Club World Cup.

"We're going to do everything we can in all ways possible. This is our job, every single day we want to go on the pitch and play football," Zidane said.

"The players are doing spectacularly well so far and yes, the Champions League is a very important objective for us. We'll see on Monday which team we'll have to face next. It doesn't change much for us.

"There are many ways to get to the final. We'll see what happens on Monday.

"It's true we have won many trophies in Japan. It's true Japanese fans love Real Madrid so much, it's a country we love and we want to write another page of history there, winning another important trophy.

"This Club World Cup is another trophy we can win. We'll have a game in La Liga on Saturday first [against Deportivo La Coruna], then we'll stay a week there and we'll do our best.