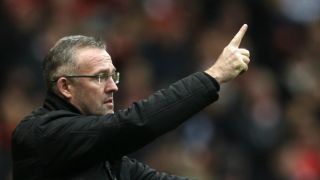 Villa are now without a win in their last eight Premier League matches and have not scored in six games - a new club record.

Their goal drought passed 10 hours in north London, but Lambert felt his side were by no means outclassed by Arsenal despite conceding four in the second half.

"I thought we looked comfortable with the ball, the disappointing thing for me was the second goal [which saw Mesut Ozil finish a swift counter-attack]," Lambert said in his post-match press conference.

"You cannot lose the ball 80 yards from our goal and Arsenal score from that, it's really disappointing.

"You probably can't print the things I am feeling right now.

"For 60 minutes we were in that game, the disappointing thing for me was an acceptance to lose more goals, that was disappointing.

It appears it will take something special for Villa, who sit three points above the relegation zone, to end their woes in front of goal.

Lambert insists it is something the players work on, and there is no shortage of attacking intent in their approach.

"We do finishing and crossing in training every time and the lads are fine with that, but when it comes to the big pitch we have got to perform at that level," admitted Lambert.

"The players that are going on the pitch are not defensive players.

"The three lads up front are offensive players, [Tom] Cleverley is offensive, Fabian [Delph] is really creative as well, so it is not as if we are trying to park everything, we are going out there and trying to win the game and trying to score."

The Villa boss has already brought in Carles Gil and Scott Sinclair this month but may continue to search for alternative solutions to his side's scoring problems.

The Scot did not rule out further moves before the transfer window closes on Monday.

"Whether things happen between now and Monday, it is a 'wait and see', but if I think somebody can come in and improve us, then it is something I will look at." said Lambert.

"I think Carles has given everybody a big lift.

"I think Scott will make a big impact for us, if I can do one or two more and I think it is going to help then it is something I will look at."