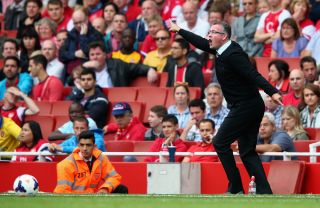 The 26-year-old helped the visitors recover from a goal down by winning two penalties, both of which were converted by Christian Benteke, before Antonio Luna wrapped up an unlikely victory.

And Lambert believes the forward is impossible to deal with when showing the sort of form he did at the Emirates Stadium.

"I think everybody up and down the country thought it was a home banker probably," the Villa boss said. "But I've got lads in here who are really top footballers and I thought Agbonlahor was just unplayable.

"I thought he was absolutely fantastic, it was as good a performance as I've seen from an individual in many a year - nobody can catch him when he's in that form.

"But he's been like that probably the last four months of last season and he's started this season the way he has."

The Scot also dismissed suggestions that Arsenal were hard done by to concede two spot-kicks, adding: "The first one Gabby has got with his speed and I think the second one you tend to go by the deviation of the ball.

"The ball hasn't gone anywhere and I think if the lad (Laurent Koscielny) had won it the ball would've gone to the corner flag. But Gabby's foot got it and it just went straight on. So I think the referee's called it right."

Lambert also attempted to play down expectations for the 2013-14 campaign, insisting that Villa must focus on difficult upcoming fixtures against Chelsea and Liverpool.

"We've got miles and miles to go but what it has done is given us a great start to the season," he continued. "We had a terrific crowd watching us today and we've got a really tough first three games.

"I think everybody thought we would get no points out of the first three games if you look at the fixtures, but the performance today - the counter-attack football we played was outstanding."