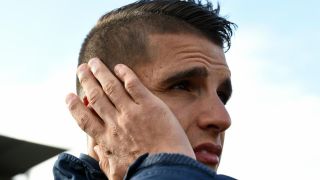 Tottenham midfielder Erik Lamela has been left confused by rumours linking him with a White Hart Lane exit once again this off-season.

Since arriving at Tottenham in 2013, Lamela has been constantly linked with a move away from the Premier League club.

But the Argentina international insisted he has no plans to leave, especially with the unfinished business of securing a title for Tottenham.

"Ever since I came to Tottenham I've heard that I am supposed to be leaving," he said.

"It is the same every summer. I do not know why.

"Even when things did not go as planned at the start, I never thought about leaving."

Tottenham were Leicester City's most likely challengers as the last Premier League season drew to a close, only for a complete capitulation at the end of the campaign seeing them finish third.

But Lamela believes Tottenham are in for an improved effort in 2016-17.

"Last year we did very well by finishing third," said the forward. "I feel we can do even better this season."