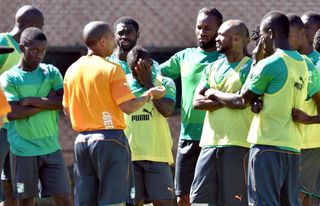 The African nation came from behind to win their Group C opener 2-1 against Japan, and can take a significant step to reaching the last 16 with a win in Brasilia on Friday.

However, Lamouchi said the Ivorians must work on their ball control against the Colombians, who won their opener against Greece 3-0.

"Certainly, we will be more attentive than against Japan, winning a few more duels," Lamouchi said.

"We will need to make fewer technical errors also if we want to stay in the game.

"The game will be played mainly mentally again. We'll have to have a good reading of this game."

Lamouchi said he will set the challenge to his midfielders to pressure the Colombians when on the ball, as he believes they are hard to dispossess.

"Colombia is a team with a lot of experience with players like (Mario) Yepes and (Cristian) Zapata among others," Lamouchi said.

"With talented young players like James Rodriguez also. They are strong enough on the wings with (Victor) Ibarbo and (Juan) Cuadrado.

"This is a fairly complete team with great attacking ability and defensive rigour.

"A team that doesn't lose the ball much in midfield, leaving little space.

"It will be a very different match for us from the one we played against Japan."

Lamouchi said a key factor in their fortunes in Brazil will be forward Didier Drogba, with the 36-year-old an inspiration to the squad's younger players.

"For us, Didier is more than a captain. He has an important role. We take advantage of his experience, his professionalism. He's a great competitor," Lamouchi said.

"He is an example for young players who come into this team. It's obvious he has a key role in this adventure for every game but also every day in training for the last month. He is not the only one.

"The fact that he is an icon, not only Ivorian but also African and global, the Japanese have perhaps seen the entry of Drogba as an additional weapon, (and) others were able to find more space. We took advantage.

"Didier made the perfect entry into the game. I did not expect anything else. He is a champion, a competitor.