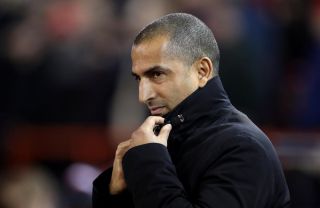 Sabri Lamouchi told his Nottingham Forest players to keep their heads up and stay positive despite suffering late frustration for the second time in a few weeks against Reading following a 1-1 draw at the City Ground.

It looked as though Forest were on course for a win that would have lifted them into third place in the Sky Bet Championship when Lewis Grabban put them in front with his 16th goal of the season in the 80th minute.

It left Forest in fourth and fans feeling fresh frustration – but that outlook was not shared by Lamouchi.

“This was a good point against a good team. They are very organised and they do not give you space. I thought we had scored in a good time – but they scored at the wrong time for us,” said Lamouchi.

“Our players deserved a victory, because we controlled the game, we tried to make things happen – but it was not enough.

“I have told the players to keep their heads up, to keep going, because this was a good point. This was the best performance in the last three home games we have had.

“But we must stay positive. I am positive because the road is long and tough for everyone, not just for us. We need to be positive and proud of the way we play.

“My players, with this kind of performance, deserved to win. But we have been working together for no more than six months and we need to learn about this kind of situation. We have a lot to learn. But we will keep going, because this is not a bad result. It is not.”

Royals boss Mark Bowen praised his side for their fighting spirit, after seeing them claim a late equaliser, just as they had done when the two teams met in Berkshire just over a week ago.

“In the second half, we were the side that were more comfortable in possession – it was a lot like the first game, really,” said Bowen.

“We defended resolutely in the first half. We had young players putting in an accomplished performance against a side that has been in and around the top six all season.

“It was very pleasing for me again. Having gone behind to Forest again, we showed our character again.

“I thought the Forest goal was offside but, to be fair to the referee and his assistants, when I have seen it again, it was a good call from them to give it.

“It was a goal, there were a few rebounds and the ball ends up at the far post – and that is what Lewis Grabban does well, isn’t it?

“But we shrugged that off, we got the ball down, we got control of the game again. I just had a strange feeling that we were going to get something.

“I felt that we were going to get another chance to score, because we did not let their goal influence us. And we did get the goal, thankfully.”