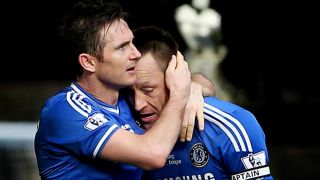 Frank Lampard says Derby County would sign former England captain John Terry "all day, every day" if they could afford his wages.

Terry, who rejected a switch to Spartak Moscow for family reasons, had been linked with joining former Chelsea team-mate Lampard at Derby.

Terry has been offered the chance to join Chelsea's backroom staff but has indicated he could play on for another season if he receives the right offer.

And Lampard clarified while he would have liked to add Terry to his squad, he is unable to justify paying the 37-year-old's salary given Derby's finances and current options in the first team.

"John's a great player, a great person. He would be great for any club," said Lampard. "What I had to do when I came here is prioritise in where we want to move.

"We had to sell the top goalscorer in the league [Matej Vydra to Burnley]. I say, 'we had to sell', we sold him to make room and make changes in general, to bring in more options going forward in attacking areas. We had to do that, so we have to refill those goals.

"Then you have to look at what you've got. I've got Curtis Davies here, Richie Keogh, who made his 300th appearance. I brought in [Fikayo] Tomori as we need some youth to help us there. It simply was a door that wasn't really open. We had to cut the wage bill.

"So listen, I'll say it again because I don't want it to look like it's not a choice of John Terry - I would take John Terry all day, every day. But we have to think about wage bill, the players we've got and the priority of the squad. It's as simple as that.

"John will be brilliant at whatever he does. The choices should be and will be his now, when you're a legend of the game and work so hard, he can play on, do media, he can manage, and he'll do it very well."

Derby County manager Frank Lampard has been charged following the game against Rotherham United on Saturday [15/09/18]. It is alleged that his behaviour in the 77th minute amounted to improper conduct. He has until 6pm on Thursday [20/09/18] to respond to the charge. September 17, 2018

Lampard was charged by the Football Association (FA) on Monday having been sent off during his side's 1-0 defeat against Rotherham United and he wants more consistency on discipline from the governing body.

"I've accepted it, it was the right thing to do," Lampard said. "It's a new rule this year, yellow and red cards. My issue with it was that other managers and assistants are leaving areas all the time to talk to fourth officials and shout to the referee or linesman, and it's not being dealt with.

"It's new, consistency is a problem but that's not my argument to fight, that's for the FA to sort out and make the right decisions. The referee was very quick to get the red card out, make of that what you will.

"I saw their manager and assistant out of their technical area. I saw a manager celebrating on the pitch with his players on the weekend, which actually I like. We've got to be careful to take away too much emotion.

"If there's language or physical contact it's an obvious thing, but I thought a slap on the wrist and 'Get back in your area' would have been sufficient. I'm emotional watching the game, every decision went against us. But it's done, I'll accept the fine and move on."