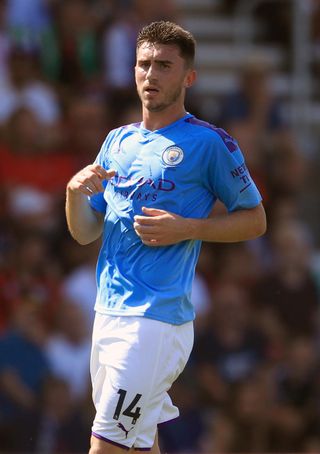 Manchester City defender Aymeric Laporte admits he has returned from his serious knee injury earlier than he expected.

The Frenchman was a surprise inclusion in Pep Guardiola’s starting line up against Sheffield United on Tuesday night, having not been involved with the first team for almost five months.

He required surgery after damaging his cartilage and lateral meniscus during City’s home win against Brighton on August 31.

Laporte’s comeback lasted 78 minutes and he is now looking forward to the rest of the season.

“Normally it would have been later but I spoke with the manager and tried today (Tuesday) and he told me I would play so I am very happy to be back as soon as possible and have minutes and help the team,” said Laporte.

“It was very important for me to try to be with the team, to be involved. It was a good test of fitness. The game was difficult because they are very strong, a good team.

“I think we did well so I am very happy to win this game and be back with the team.

“It was difficult for me (being out), my team-mates see me suffering. But now I can help the team out and give my best and I hope I will play more time and help them more.”

City have looked suspect at the back in Laporte’s absence and, aside from an early scare when Billy Sharp got in behind, his return brought back a degree of stability to the defence as the Blades were largely kept at arm’s length at Bramall Lane.

After the match, Guardiola admitted his team had missed the 25-year-old and described him as the best left-sided central defender in the world.

Laporte said: “It’s great to hear that from this manager as he is one of the best in the world, if not the best. I am very happy to hear that but I have to work to stay there and keep going.”