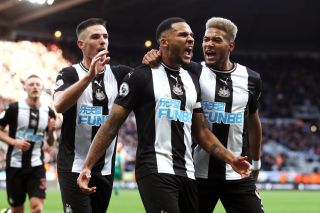 Skipper Jamaal Lascelles is refusing to pile the pressure on £40million striker Joelinton to score the goals to ease Newcastle out of Premier League trouble.

The 23-year-old Brazilian has managed to find the net only once since his big-money summer move from Hoffenheim and drew another blank on Sunday as the Magpies drew 1-1 with Wolves at St James’ Park.

With £21million January signing Miguel Almiron yet to open his Newcastle account, Steve Bruce’s side has been distinctly goal-shy.

But Lascelles, whose first-half header from Federico Fernandez’s cross gave them the lead against Wolves, insists it is a team effort.

“But goals don’t just come from one striker, everyone can chip in with them, so we aren’t putting too much pressure on one person because he needs the service, he needs people supporting him, he needs people to allow him to get into good positions and runners off him.

Lascelles’ 37th-minute header – his first goal since January last year – was just reward for Newcastle’s first-half display, but Wolves responded after the break as their hosts wilted and Jonny’s 73rd-minute equaliser set up a grandstand finish during which Sean Longstaff was dismissed for a challenge on Ruben Neves.

Lascelles said: “We did have a couple of chances first half – if we go 2-0 up at half-time, it completely changes things.

“We do need to be a little bit more ruthless, see games off, have more nous and be a bit more streetwise, just little things and I think that’s what’s killing us recently, to be honest.

“Obviously I’m pleased that I got a goal, but it would have been better if we got the three points. That’s all I really care about, to be honest.”

Nno Espirito Santo was far from dispirited after seeing his side fight back and very nearly snatch victory through Matt Doherty’s stoppage-time header.

But the Wolves boss was at a loss to explain why his team, who have scored 13 of their last 15 league goals in the second half, finishes stronger than it starts.

He said: “If you think about how we conceded the goal, sometimes you have to give credit to the opponent. But I think we recovered the ball and, trying to go out, we lost the first pass and allowed the cross into the box.

“It’s always difficult after set-pieces because all Newcastle’s big guys were there, Lascelles and Fernandez were there, so it’s difficult to control.

“It’s about rules, tasks and we must improve on that. But why? If I knew the ‘why’, it would not have happened today, so I am going to work now to try to find out the ‘why’.”