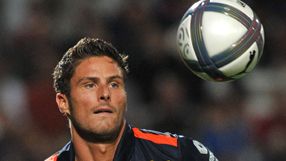 Giroud headed home with seven minutes left as Montpellier, who have 24 points from 14 games, leapfrogged Paris Saint-Germain, 2-1 winners against Caen.

Previous leaders Brest dropped to fifth only two points off the pace after losing 2-1 at third-placed Stade Rennes.

Champions Olympique Marseille were fourth on 22 points as substitute Andre Ayew struck late to give them a 1-0 win at Toulouse.

At the Stade du Ray, Montpellier left it late to see off Nice.

Giroud, who had replaced Souleymane Camara in the 75th minute, found the back of the net after beating defender Renato Civelli to the ball in the 83rd for his sixth league goal of the season.

"I just benefited from the work of my team mates," Giroud told French TV channel Canal Plus.

"We played a solid game and we had more chances to score so we deserve our victory."

Montpellier's win ended Paris Saint-Germain's brief stay at the top of the standings following their home win against Caen earlier in the day.

PSG were far from brilliant but once again relied on their striking pair to prevail.

France forward Hoarau headed home Siaka Tiene's cross from the left to put the hosts ahead five minutes before the break.

Turkey striker Erding doubled the tally five minutes into the second half when he collected a long ball just inside the box and fired past Alexis Thebaux.

Caen threatened a comeback when Youssef El Arabi netted a splendid shot on the turn five minutes from time but the PSG defence then just sat back and held on.

It took Marseille much longer to subdue Toulouse but substitute Ayew clinched the points when he headed home a Cesar Azpilicueta cross with two minutes left in a dull game.

Didier Deschamps's side are just one point behind PSG and Rennes, who handed promoted visitors Brest their second defeat in three league games.

Brest midfielder Bruno Grougi reduced the arrears from the spot in added time but it was too late for a comeback after Kembo-Ekoko's curled shot and Leroy's powerful strike from inside the box had put Rennes firmly in charge.