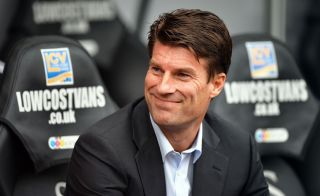 Swansea return to Premier League action after the international break when they welcome Sunderland to the Liberty Stadium on Saturday.

Laudrup's primary concern will be looking to arrest back-to-back top-flight defeats against Arsenal and Southampton, while also trying to orchestrate Swansea's first home success in the Premier League since a 1-0 triumph over Newcastle United in March.

The fixture marks a run of three consecutive home matches for the club, with a UEFA Europa League tie against Kuban Krasnodar on Thursday before they host Sam Allardyce's West Ham a week on Sunday.

And Laudrup is confident his players can win all three fixtures, but warned not to underestimate bottom side Sunderland, who will be looking to impress new manager Gus Poyet in his first match in charge.

"For me, this is a huge week for us," he said. "We have three home games in eight days, and we need to win at home. But it won't be easy.

"Sunderland have some very good players in their squad, and we will respect them. They have a new manager and they will want to do their best and show him that they should be starting.

"If we can get two good results in the league, and a win on Thursday, we will sit comfortably in the table and have one foot in the knockout stages of the Europa League.

"It will mean a lot for us and the confidence that it will bring. But we need to win."

Swansea striker Michu made his first appearance for the Spain national team in Friday's 2-1 FIFA World Cup qualifying victory over Belarus, before he was an unused substitute in the 2-0 success over Georgia.

Laudrup has challenged the 27-year-old to force his way into Vicente del Bosque's squad for the showpiece event in Brazil by performing to his full potential for Swansea.

He added: "They have around 35 really top players and it depends how we, and Michu himself, does this season to see if Del Bosque calls on him."