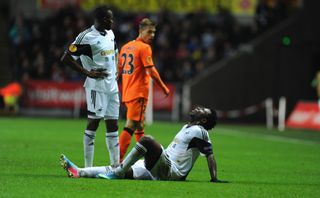 The Welsh club missed the chance to book their spot in the knockout stages after Daniel Parejo's strike gave the Spaniards a 1-0 win at the Liberty Stadium.

But there was further concern for head coach Michael Laudrup with Bony forced off just before half-time after feeling a twinge in his right hamstring.

With last-season's leading-scorer Michu also currently sidelined with knee and ankle problems, Swansea could find goals hard to come by ahead of a crucial two-week period for the club.

Asked about Bony's injury post-game, Laudrup said: "It could be quite a serious one.

"We will have to wait two or three days until we get a scan but unfortunately I think we are talking several weeks at least.

"But today we saw Alvaro (Vazquez) have a goal disallowed and one cleared off the line. With Bony's injury, now he has his chance.

"It is a blow but that's how it is. You have to accept it and when you have a lot of games this is a possibility.

"Let's see what happens with Michu in the next week or so."

Bony was not the only injury concern for Laudrup, with right-back Angel Rangel also picking up a calf problem, which could also see him sidelined for a couple of games.

The Swans face four tough matches in the next 12 days, starting with a clash with free-scoring Manchester City in the Premier League on Sunday.

They must now also travel to St Gallen in Switzerland on December 12 and come away with at least a point to ensure progression to the last 32 in the Europa League.

Despite being outplayed in the opening half, Swansea had a right to feel aggrieved not to have been awarded an equaliser when Vazquez struck on the stroke of half-time only to have it controversially chalked off for offside.

Speaking on the defeat to the Spaniards, Laudrup said: "Valencia were the better team in the first half. They dominated the midfield. Not that they created many chances but they did dominate the first-half.

"We had a disallowed goal, which I think we all saw that, unfortunately for us, was given offside when he was at least a yard on.

"I think we took over in the second half. We had three or four chances – one saved on the line and a couple of others went very close.

"Now, we just have to get that last point in Switzerland. They are out of the competition but they will want to win."