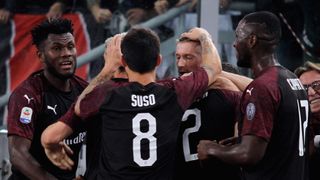 Joaquin Correa's stoppage-time equaliser rescued a 1-1 draw for Lazio against AC Milan but Simeone Inzaghi's men missed the chance to open up a four-point advantage over their visitors in the Serie A table.

Franck Kessie's deflected effort in the 78th minute looked to have settled a game that Lazio dominated for long spells in Milan's favour, but substitute Correa netted in style to allow the Stadio Olimpico faithful to breathe a sigh of relief.

Gianluigi Donnarumma gave a reminder of why he remains one of world football's most highly touted goalkeepers, pulling off a number of excellent saves to deny an authoritative Lazio side victory.

Ciro Immobile's goalless streak now stands at four games but he can have no complaints about the service afforded him by a Lazio midfield brimming with craft and Inzaghi will be disappointed not to have taken maximum points after a strong performance.

Milan were on the back foot during the opening exchanges but burst into life when Suso got behind the Lazio defence and whipped in a cross that eventually found Hakan Calhanoglu, who curled a deflected shot against the post.

Sergej Milinkovic-Savic put the ball in the net in the 28th minute after a sweeping Lazio attack but the effort was ruled out for offside.

Donnarumma pulled off a superb, diving save to keep out Luis Alberto's volley from the edge of the box early in the second half before Marco Parolo had a vociferous penalty claim dismissed by the referee when he fell under a challenge from Kessie.

Lazio soon resumed their onslaught and forced Donnarumma into an even better stop when substitute Jordan Lukaku's header failed to beat his razor-sharp reflexes.

Milan appeared to have pulled off a smash-and-grab win after Davide Calabria burst into the Lazio half and cut the ball back to Kessie, whose shot hit Wallace's arm on its way past the stranded Thomas Strakosha.

But Correa made sure the points were shared when he controlled Cristian Zapata's defensive header immaculately and thumped the ball low into the left corner of the net.

What does it mean? Lazio unbeaten in three

Lazio were moments away from slipping below Milan in the table but Correa's strike means they remain in the Champions League places and have avoided defeat in their past three league games, while the Rossoneri are winless in three across all competitions.

Donnarumma kept the visitors' hopes alive with a string of magnificent saves but in the end Milan's patchwork defence could not hold out.

Parolo's plea for a VAR consultation when he went down in the box fell on deaf ears but Lazio would not have needed decisions to go their way had the midfielder taken one of the chances that fell to him in the first half.

Lazio travel to Cyprus to face Apollon Limassol in the Europa League on Thursday, while Milan are at home to F91 Dudelange.