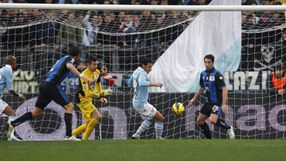 Juventus, with 45 points from 20 games, drew 1-1 at Parma and have had their lead slashed from eight points to three by Lazio in two successive weekends after taking only one point from a possible six.

Atalanta greeted Lazio's 67th-minute goal with furious protests after the ball hit the underside of the crossbar and rebounded past Floccari with replays showing he brought it under control with his right arm before firing home from close range.

Hapless Atalanta defender Davide Brivio scored an own goal with a diving header 10 minutes later to wrap up the points for Lazio while the visitors had Carlos Carmona sent off in the 83rd minute.

"It was without doubt accidental and the referee could have blown the whistle or not blown the whistle," Lazio coach Vladimir Petkovic told reporters. "The referee is there to decide, this one has gone in our favour and we have had lots go against us."

Atalanta coach Stefano Colantuono did not agree: "It was a clear handball by Floccari and the match ended there and then," he said.

Defending champions Juventus also scored a controversial goal at Parma, taking the lead through an Andrea Pirlo free-kick deflected in by Jonathan Biabiany and which the hosts believed should not have been awarded in the first place.

Juve midfielder Simone Padoin went down in a heap outside the area but replays suggested no contact had been made by a Parma player.

Nicola Sansone levelled for Parma in the 77th minute, bursting past Martin Caceres to score with an angled shot and allow Roberto Donadoni's team to maintain the only unbeaten home record in Serie A.

Third-placed Napoli also won, 3-0 against lowly Palermo, to stay two points behind Lazio and further liven up the title race.

A Christian Maggio header and swerving shot by Switzerland captain Gokhan Inler in a four-minute first-half spell put Napoli in command and Lorenzo Insigne completed the scoring midway through the second half.

Palermo, who have taken a dismal one point from their last six games, remained one place off the bottom.

Fiorentina, fifth with 35 points, and sixth-placed AS Roma both lost ground with defeats for the second weekend in a row while AC Milan stayed seventh after a goalless draw at Sampdoria.

Thirty-five-year-old Antonio Di Natale scored twice to give Udinese a controversial 3-1 win over Fiorentina while a second-half goal from Alejandro Gomez gave Catania a 1-0 win over spectacularly erratic AS Roma.

Fiorentina took a 20th-minute lead when Gonzalo Rodriguez's header bounced down off the underside off the crossbar, hit Udinese goalkeeper Zeljko Brkic and went into the net.

Brkic was taken off injured in the 40th minute but Udinese were awarded a controversial penalty in first-half stoppage time for an alleged foul on Maurizio Domizzi and, after several minutes of arguing by Fiorentina, Di Natale fired home from the spot.