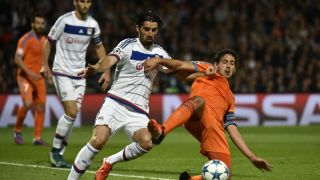 Lazio have completed the signing of Serbian defender Milan Bisevac from Lyon.

The terms of the club's deal for the 32-year-old were not disclosed.

A brief statement on Lazio's official website read: "SS Lazio announces that Milan Bisevac is a new player [for the] Biancocelesti."

Bisevac, capped 19 times by his country, joined Lyon from Paris Saint-Germain in 2012 having also represented Lens and Valenciennes since moving to French football from Red Star Belgrade in 2006.

He struggled for regular first-team action with Lyon this season, making the last of five Ligue 1 starts in a 4-2 home loss to Montpellier at the end of November, while hamstring and knee ligament injuries severely curtailed his 2014-15 campaign.

Bisevac joins a Lazio side 10th in Serie A following a goalless draw against second-bottom Carpi on Wednesday.