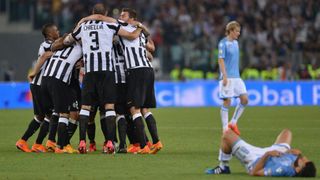 Juventus beat Lazio to the Coppa Italia in the 2015 final and on Wednesday they meet at the Stadio Olimpico again, this time in the quarter-final stage.

Lazio took the lead in last May's final at their home stadium but succumbed to a 2-1 defeat after extra time with Alessandro Matri's 97th-minute strike earning what would be the first part of a domestic double in Massimiliano Allegri's maiden Juventus campaign.

The win ended Juve's 20-year wait for a 10th Coppa Italia title and made them the competition's most successful club.

If that was not enough to ply Juve with confidence, they head into Wednesday's clash having extended their winning streak in Serie A to 10 games by beating Udinese 4-0 on Sunday.

Sami Khedira believes they must continue their good form as they head into a tough run of fixtures.

"We are playing very well, we are in great form but we still haven't achieved anything, we mustn't let up," he told Sky Sport Italia.

"We have to make sure that we keep this run going. We have so many important games coming up, beginning of course with Lazio and Roma [in Serie A]. We are feeling great and enjoying our football."

Lazio's last win over Juventus came in the semi-finals of the 2012-13 edition of this competition – a 2-1 victory at the Olimpico en route to the lifting the trophy.

Coach Stefano Pioli admits it will be tough for his side to replicate that triumph but harbours belief they can bring Juve's sensational run to an end.

"Wednesday will be a difficult match. Juventus come in off the back of a 10-game winning streak and are in exceptional form," he told Lazio Style.

"It will be very complicated, the Bianconeri are always a tough opponent for us. [They are] a great team, but not unbeatable."

Allegri rested Paul Pogba for the weekend's destruction of Udinese and the Frenchman could be set for a return to the starting line-up, with Kwadwo Asamoah likely to make way.

Martin Caceres is expected to take Daniele Rugani's place in defence, while the coach hopes to have Andrea Barzagli available following a muscular issue.

Lazio were boosted by the goalscoring return of Senad Lulic in the 2-2 draw with Bologna at the weekend, while Santiago Gentiletti is edging towards fitness.