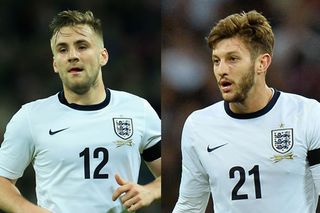 Lallana and Shaw have been heavily linked with moves to Liverpool and Manchester United respectively as the Premier League campaign comes to a close, but Le Tissier would love to see the two graduates of Southampton's academy stay with the south-coast club.

Both Shaw and Lallana are expected to make Roy Hodgson's England squad for this year's FIFA World Cup in Brazil, while some have argued they must leave Southampton to further their international ambitions.

Le Tissier scored 161 goals in 443 appearances for Southampton, but was restricted to just eight caps for England.

The 45-year-old former attacking midfielder, however, has warned Lallana and Shaw what a lack of playing time at a bigger club may do to their international hopes.

"The landscape has changed since I was a player, when you probably needed to play for one of the top four or five sides to be considered for England contention," Le Tissier told the Mirror.

"Now there is such a shortage of English players in the Premier League that it means you are bound to get noticed if you are playing well.

"The pool of English talent has shrunk so much that I don't think Lallana and Shaw would be doing their careers any harm by sticking around at Southampton. Shaw, especially, has time on his side because he is so young.

"Theo Walcott went to Arsenal at a very young age, when he was only 17, and he hardly played for a couple of years - which is two years of his career he will never get back."

Le Tissier concedes that the lure of regular European football could prise the duo away from St Mary's - especially Lallana, who could play in the UEFA Champions League with Liverpool next season - but he maintains Southampton's captain should remain wary.

"For Adam, if he decides to join a club in the Champions League, the main consideration is going to be time on the pitch," the Guernsey-born former playmaker said.

"At Saints (Southampton), as captain, he is first name on the teamsheet. But if he is competing for a place in a squad with 25 internationals, is he going to play every week?

"Much of his calculation will have to be based around how much football the boy himself wants to play."