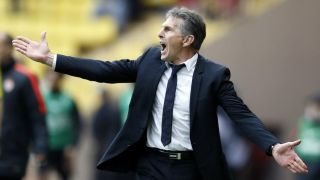 Puel arrived at St Mary's Stadium on Thursday, after leaving his previous job at Nice.

But, before he has had a chance to get settled on the south coast, star men Victor Wanyama and Sadio Mane have been sold to Tottenham Hotspur and Liverpool respectively.

Rather than panic in the search for replacements, Le Tissier has encouraged Puel to first consider the remaining group of players before spending the money the club have recouped in transfer fees.

"I guess top of the priorities will be to strengthen the squad for the season coming," he told the Daily Echo.

"We've lost a couple of players in Sadio Mane and Victor Wanyama, so I guess he will probably be looking at another holding midfielder.

"He'll probably want to assess the squad before making any rash judgements. He'll have a chance to decide where he thinks it needs strengthening from his point of view."

The Saints hierarchy and backroom staff, led by head of football development Les Reed, are likely to have already identified candidates to replace the departed players, with the club having proven their expertise in scouting and recruitment in recent seasons.

Former Monaco midfielder Puel guided Nice to fourth in Ligue 1 last season, securing qualification for the Europa League, a competition in which they could meet Southampton.