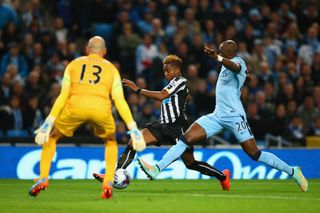 The hosts had won the previous 11 meetings between the sides in all competitions and named a strong starting line-up for the fourth round clash, including the likes of David Silva, Yaya Toure and Edin Dzeko.

But it was Rolando Aarons – one of a number of youngsters given a chance by Newcastle manager Alan Pardew at the Etihad Stadium – who broke the deadlock.

The England Under-20 international made the most of his opportunity when the ball fell to him inside the City penalty area after six minutes, slotting between the legs of goalkeeper Willy Caballero.

Both sides traded chances in an open first half, with Stevan Jovetic squandering two of the home side's better opportunities, but substitute Moussa Sissoko scored a superb solo effort in the 75th minute to seal Newcastle's first win over City since 2005.

Ryan Taylor made his return to the Newcastle starting line-up following more than two years on the sidelines with a knee injury, but his first contribution was to bring down Silva on the edge of the penalty area.

Toure blazed over from the resulting free-kick, but Taylor was soon doing his best to show Newcastle what they had been missing for the past 26 months.

The defender put a hesitant Fernandinho under pressure midway inside the City half, with the ball subsequently breaking for Aarons to slot through the legs of Caballero.

Things went from bad to worse for the hosts as Silva proved unable to shake off a knock picked up as a result of the early challenge by Taylor, with Samir Nasri – making his first appearance since mid-September after groin surgery – coming on in his place.

Jovetic should have pulled City level in the 20th minute when the ball fell to him in the six-yard box, but goalkeeper Rob Elliot got down well to his right to make the save.

Daryl Janmaat pulled the trigger from 20 yards to test the reactions of Caballero two minutes later, before Newcastle captain Fabricio Coloccini inadvertently diverted the ball onto Elliot's left-hand post at the other end.

Both goalkeepers were having to maintain their concentration in an entertaining first half, with City striker Jovetic firing over from close range and visiting defender Paul Dummett denied by the legs of Caballero after shaking off his marker at a corner.

The second half proved a tighter affair, with Newcastle sitting back to defend their one-goal advantage and City patiently trying to find an opening, but the black and white backline was holding firm.

Newcastle felt they should have been awarded a penalty when Gabriel Obertan was brought down by Aleksandar Kolarov, but referee Stuart Attwell – set to make his Premier League return this weekend after more than two years away – waved play on.

However, it proved insignificant as Sissoko picked up the ball 20 yards out and worked his way through the City defence before beating Caballero with a delightful flick.

City won 2-0 at St James' Park in the League Cup fourth round a year ago this week, but strong defending ensured that Pardew's men returned the favour this time around, with the returning Taylor denying Dzeko on the line in the closing stages.