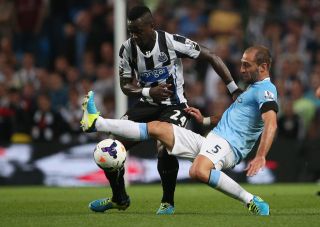 Alan Pardew's side slumped to a 2-1 defeat in their Premier League derby against Sunderland at the Stadium of Light on Sunday, a result that gave their fierce rivals their first league win of the season.

Mathieu Debuchy thought he had rescued a point for Newcastle when he cancelled out Steven Fletcher's early opener, but a superb late strike from substitute Fabio Borini handed Sunderland all three points in new manager Gus Poyet's first home game.

The defeat is typical of Newcastle's inconsistent start to the campaign, which has seen them win five and lose four of their 11 fixtures in all competitions.

One of those reverses came at City on the opening weekend of the Premier League season, when Manuel Pellegrini's men ran riot with a 4-0 victory.

Pardew has no fresh injury worries ahead of Wednesday's clash at St James' Park. Ryan Taylor (knee) remains a long-term absentee, while Fabricio Coloccini is unlikely to be risked as he continues his recovery from a groin injury.

Pellegrini, meanwhile, will also look to get his charges back on track after they fell to their third Premier League defeat of the season in a 2-1 defeat to fellow title hopefuls Chelsea on Sunday.

Sergio Aguero looked to have earned City a draw when he equalised Andre Schurrle's first-half opener, but a mix-up between Joe Hart and Matija Nastasic allowed Fernando Torres to tap home an injury-time winner.

The result leaves City in seventh place with 16 points from nine games, and Pellegrini will demand a response from his squad who have looked vulnerable defensively this season.

The Etihad Stadium outfit have scored more goals than anyone else in the top flight with 21 goals so far, but have also shipped 11.

Captain Vincent Kompany will be unavailable for the fixture as he continues his comeback from a thigh injury.

City hammered Wigan Athletic 5-0 in the round three of the League Cup, while Newcastle have defeated Morecambe and Leeds United to make it to this stage.