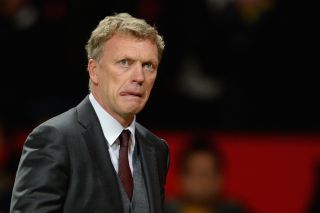 Both clubs have fallen some way short of expectations in the Premier League so far this season, with Sunderland languishing at the foot of the table and United 11 points behind leaders Arsenal in seventh.

United were also dumped out of the FA Cup on Sunday as Swansea City claimed a shock 2-1 win at Old Trafford to pile further pressure on David Moyes.

However, both United manager Moyes and Sunderland head coach Gus Poyet will know a trophy is well within reach when their teams meet at the Stadium of Light for the first leg of a League Cup semi-final.

Sunderland have already sprung one major surprise in this season's League Cup, knocking out Chelsea at the last-eight stage courtesy of Ki Sung-Yueng's extra-time winner.

In contrast to United, Poyet's men also tasted success in the FA Cup at the weekend, beating League One side Carlisle United 3-1 to reach the fourth round.

Although Sunderland will have significant concerns over their own Premier League position, it is United who will surely go into Tuesday’s match under the greatest pressure.

In his first season since taking over from the legendary Alex Ferguson, Moyes has overseen five home defeats and will be eager to head back to Old Trafford for the second leg against Sunderland with a lead.

United, who ran out 2-0 winners at Stoke City in the previous round, have lifted the League Cup on four occasions, with three of their triumphs coming in the last eight seasons.

Sunderland's only final appearance came in 1985, when an own goal from Gordon Chisholm enabled Norwich City to claim a 1-0 victory at Wembley.

Moyes will have to cope without Fabio after the defender picked up a straight red card in the defeat to Swansea.

Fabio's dismissal came just four minutes after he had been introduced as a replacement for Rio Ferdinand, who appeared to suffer a knee injury.

United were without strikers Robin van Persie (thigh) and Wayne Rooney (groin) against Swansea and both appear likely to be unavailable at Sunderland.

Sunderland are without goalkeeper Keiren Westwood (shoulder) and defender Carlos Cuellar (thigh), while captain John O'Shea, who spent more than 10 years with United, has been troubled by a persistent shoulder problem in recent weeks.

The two teams last met in the League Cup 13 seasons ago, with Sunderland winning a fourth-round tie 2-1 after extra-time at home.