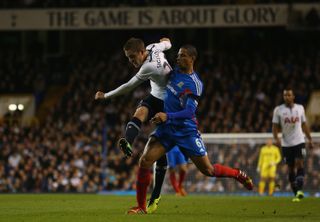 Spurs edged the Premier League encounter between the sides 1-0 on Sunday, but needed a shootout to move into their first League Cup quarter-final in four years after finishing extra time tied at 2-2 at White Hart Lane.

Gylfi Sigurdsson put the hosts ahead early on in stunning fashion, as he collected a ball from Kyle Naughton and turned neatly away from Curtis Davies before firing an unstoppable effort into Eldin Jakupovic's right-hand corner from outside the box.

Davies then brought Hull level after 52 minutes when he nudged home with a good deal of help from Tottenham goalkeeper Brad Friedel.

It looked for a moment as if the defender may have spurned the chance when he directed Elmohamady's teasing delivery back across goal and Friedel failed to collect the ball, allowing it to trickle over the line.

That proved to be the final goal of normal time, with Paul McShane giving Hull hope with his crashing header before Harry Kane fired Spurs level two minutes into the second half of extra time.

The sides could not be separated after 120 minutes and Sigurdsson scored the opening penalty before Aaron McLean's kick was saved well by Friedel.

Jermain Defoe, Stephen Quinn, Jan Vertonghen and George Boyd all then converted, before Erik Lamela's effort was saved to allow Gedo to level matters for Hull.

Kane kept cool to fire past Jakupovic and Nick Proschwitz then sent the shootout into sudden death, where the likes of Paulinho and David Meyler kept their nerve before Elmohamady's kick was saved to end a run of seven successive penalty shootout defeats for Spurs.

Tottenham boss Andre Villas-Boas made eight changes from Sunday's victory at White Hart Lane, with Kaboul coming in for his first start since the 2-0 UEFA Europa League win over Anzhi Makhachkala on October 3.

Bruce brought Danny Graham, Robert Koren and Stephen Quinn into Hull’s starting XI, while also handing Jakupovic his first start of the season. Leading goalscorer Robbie Brady failed to make the bench as he continues to recover from hernia surgery.

Spurs almost went ahead after nine minutes when Paul McShane, under pressure from the lingering Defoe, headed a Paulinho delivery just past his own post.

The Brazilian midfielder then lashed a shot wide as the hosts began to dominate possession and create chances.

And after 16 minutes, Tottenham’s dominance was rewarded when Sigurdsson cleverly turned his marker and smashed a long-range drive past a helpless Jakupovic.

Following Villas-Boas' comments on the "difficult" atmosphere at White Hart Lane during Sunday's game, Sigurdsson's goal certainly gave the home fans something to cheer, and Spurs continued to enjoy plenty of the ball.

Hull were level seven minutes after the interval, though, courtesy of Friedel’s error when dealing with Davies' close-range effort.

Tottenham substitute Kane almost spared his side extra time but his 20-yard effort in the final minute of normal time cannoned back off the post.

Nine minutes into extra time, McShane's powerful header had too much for Friedel, only for Kane to bring Tottenham back into the game by striking left-footed past Jakupovic inside the area.

This forced the penalty shootout with Friedel atoning for his earlier error by saving Elmohamady's penalty to ensure his side will face West Ham at home in the quarter-final.