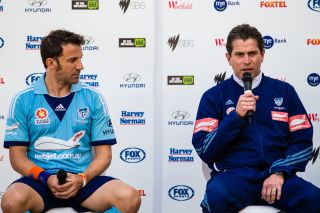 Del Piero, 38, impressed during his first campaign in Australia but will be hoping his side can at least claim a finals spot this season.

Frank Farina's men take on a Jets side which has marquee Emile Heskey in their ranks, but the Englishman is sidelined with a knee injury.

The clash in round two last season saw the Jets claim a 3-2 win at Allianz Stadium, with Del Piero and Heskey both on the scoresheet.

Expectations are always high at Sydney leading into a campaign and Farina will be desperate to make a winning start.

"For sure our target is the play-offs but step by step and the first step for us is at home against Newcastle on Friday," Del Piero said at the A-League season launch on Tuesday.

"That's the only thing we're thinking about and we have to play good with heart and with passion and possibly win."

Sydney have one of the league's most talented attacks, with Del Piero, Richard Garcia and Nick Carle along with several youngsters.

The Jets have added Dutchman Kew Jaliens to their squad and he will provide their defence with much-needed experience ahead of what should be an entertaining encounter.

Elsewhere in the opening round, Central Coast host Western Sydney at Bluetongue Stadium in a repeat of last year's grand final.

The Mariners were successful on that occasion against the Wanderers, who were a standout in their first season in the competition.

Graham Arnold's Mariners are again considered among the frontrunners for the title and have added Marcos Flores to their squad.

Flores' former side, Melbourne Victory, will do battle with city rivals Heart at Etihad Stadium on Saturday.

Ange Postecoglou's men will be without star captain Mark Milligan, who is away with Australia for two international friendlies.

On Sunday, Brisbane travel to Wellington to take on the Phoenix and Josep Gombau's Adelaide host Perth Glory at Coopers Stadium.