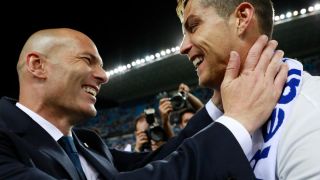 Zinedine Zidane knew he had to bring an end to Real Madrid's five-year wait to win LaLiga and stressed the club always felt clinching the title was most important.

Goals from Cristiano Ronaldo and Karim Benzema gave Madrid a 2-0 win at Malaga on Sunday as they became Spanish champions for the first time since 2012.

Zidane, who won the Champions League last season, could repeat the feat against Juventus in the Cardiff final on June 3 to make it a famous double in his first full season at the helm.

But the Madrid head coach is most thrilled to hold off Barcelona domestically and end Madrid's troubling wait for league glory, hailing his players' efforts as "f*****g fantastic".

"I am very happy, 38 match days and at the end of it all we are top," Zidane was quoted by AS after Madrid's 33rd league crown was sealed. "To win it with this game is incredible.

"It was very important to win the league - it was a lot of years without winning it.

"We knew that the league is everything and when you win it, it is very important. And for Real Madrid, because it is the best club in the world, we have to return with this league title.

"The Spanish league is the most difficult and beautiful in my opinion. As always in a season, we have worked and fought until the end, and with the squad that we have we just had to think of working."

He continued: "It has been a difficult season that we worked hard for, with tough moments. Everyone suffered, fought and ran and I am delighted for everyone.

"They have all been important. The key to everything with this team is that. They were f*****g fantastic."