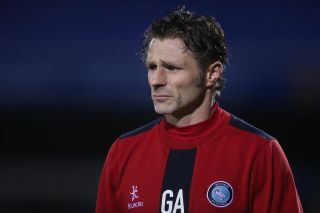 The two sides are locked together on 47 points going into Saturday's game and remain out of the bottom two only on goal difference, with Northampton Town currently occupying 23rd spot.

A win for either - coupled with a Northampton defeat at Dagenham and Redbridge - would see the victor virtually assured of survival.

Defeat is unthinkable for either side, with hosts Wycombe enjoying 21 years in English football's third and fourth tiers since their promotion from the Conference in 1993, while Rovers have never slipped out of the Football League since joining in 1920.

Both teams come into the game in torrid form, though, with each recording just one win in their last 10 League Two matches.

Chris Wilder's Northampton will be praying for a draw at Adams Park, while bottom club Torquay United look doomed to the drop.

Five points adrift at the bottom ahead of the weekend, Chris Hargreaves' men will have relegation confirmed if they fail to win at 12th-placed Mansfield Town.

Even three points may not extend their stay in the Football League, in the event of Northampton winning at Dagenham and there being a positive result either way at Adams Park.

Looking nervously over their shoulder at the bottom two are Morecambe, who sit just three points above the relegation zone ahead of their trip to AFC Wimbledon.

Exeter City are a point and a place worse off in 20th - and they look to have the toughest task of the weekend among the division's strugglers as they host promotion-chasing Scunthorpe United, who are unbeaten in 28 league fixtures.

A win for Russ Wilcox's men will see them elevated back to League One, and they could be confirmed as champions if they triumph and both Chesterfield and Rochdale fail to take maximum points from Burton Albion and Cheltenham Town respectively.

The other side fighting for one of the three automatic promotion slots are Graham Alexander's Fleetwood Town, and they welcome Southend United to Highbury Stadium, with Phil Brown's charges all-but assured of a play-off berth along with Burton.

York City are clear favourites to claim the last remaining top-seven place, and Nigel Worthington's men know a win at home to Newport County will see them extend their season.

Hoping for a slip-up will be eighth-placed Oxford United, who entertain Accrington Stanley while elsewhere, Hartlepool United make the long trip to Plymouth Argyle and Bury host Portsmouth.