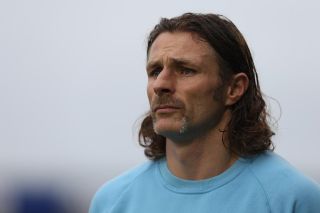 After only narrowly avoiding relegation to the Conference last term, many had expected Wycombe to struggle in 2014-15.

However, they have begun the season in impressive fashion after a 2-0 win at Newport County on the opening day was swiftly followed by a 3-1 victory over visitors Carlisle United on Saturday.

Ainsworth admits his side have reveled in their underdog tag, but ahead of the visit of 17th-placed Tranmere Rovers, he has urged them to stay focused.

"We've changed a few things both on and off the pitch [from last year]," he said.

"Finishing 19th in the league last year has allowed me to build from nothing, build from rock bottom, and if we keep on playing like we did against Carlisle we'll pick up a few more points than we did last year.

"I'm really pleased with the performance but there's a big, long journey to come."

Wycombe are one of five sides to boast a 100 per cent record so far, with early leaders Morecambe also looking to make it three wins in a row when they entertain Oxford United.

Two of last-year's play-off sides, Southend United and Burton Albion, are also in that pack and they will face AFC Wimbledon and Exeter City respectively.

Cheltenham Town followed up an opening-day success at Bury with a 2-1 win over Accrington Stanley on Saturday, but boss Mark Yates is sweating on the fitness of star striker Byron Harrison ahead of the clash with Carlisle on Tuesday.

"Byron got a smash on his thigh, leaving him with a dead leg and he was sore after the game," Yates said.

"I don't have too many other options like him up front at the moment, so I hope he is fit."

The two promoted sides - Cambridge United and Luton Town - both suffered defeat at the weekend, and they face another tricky test with Cambridge travelling to York while Luton host Bury.

Shrewsbury Town have won one and drawn one on their start to the season following their relegation last term from League One, and up next for them is a home clash with Accrington, who are yet to register a point.

Hartlepool United and Dagenham and Redbridge find themselves in the same situation as Accrington, and they go head-to-head at Victoria Park on Tuesday.

Another side languishing towards the bottom without a point to their name is Newport County, who face a trip to Mansfield Town, while Portsmouth host Northampton Town and Stevenage head to Plymouth Argyle.