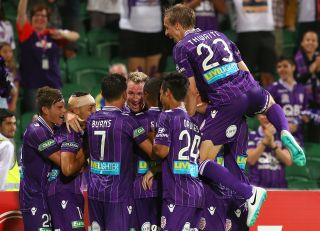 A sensational goal from Adrian Zahra put the home side ahead in the 64th minute before the returning Shane Smeltz netted a late double to seal the win following Dylan McAllister's dismissal.

Zahra had no problems celebrating against his former club after he dribbled into the box from the left and hammered the ball past a hapless Adam Redmayne.

McAllister, making his return from a hamstring injury, was brought on for Harry Kewell in the 70th minute but picked up two yellow cards inside 11 minutes, with fellow second-half substitute Smeltz capitalising to score two goals.

A depleted Melbourne Victory side did enough to hold the Newcastle Jets to an exciting 1-1 draw at Hunter Stadium.

The Jets held sway in the opening half and duly went ahead when Victory forward Mitch Nichols deflected a Craig Goodwin free-kick into his own goal three minutes before the break.

Melbourne equalised shortly after the restart with a swift counter-attack that saw Andrew Nabbout poke home.

Both sides had chances to win the contest but neither could find a decisive finish and had to be content with a point apiece.