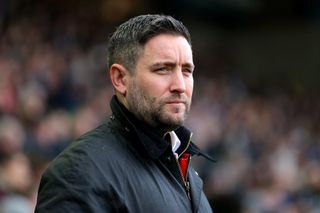 Bristol City head coach Lee Johnson urged his players to keep calm heads as the team moved into sixth place in the Sky Bet Championship with a 1-0 victory at Reading.

City created little in a poor first-half display, with goalkeeper Daniel Bentley having to make a smart save from John Swift’s fierce 20-yard drive.

But they grabbed the goal that clinched their third successive league win when Jamie Paterson tucked home from close range in the 62nd minute.

City had to survive late Reading pressure, with Yakou Meite striking a post and Ashley Williams having to clear off the goalline from Chris Gunter.

“There were some interesting results tonight,” Johnson said. “That’s the Championship, it’s competitive.

“There’s an awful lot to play for here and it’s not just us. There’s going to be six or seven teams behind us going for the play-offs.

“We’re not the finished article but you can see our spirit.

“But we mustn’t get too ahead of ourselves. Bristol has this way of building it all up and then can knock it down very quickly as well.

“I thought that we started brightly tonight and the players applied everything that we worked on in training.

“I don’t think that the clean sheet is a fluke because it’s the third one in three.

“The defending work that we have been doing has been outstanding.

“Sometimes it’s just a case of having to weather the storm, which we had to do in the last 10 minutes.

“I was disappointed that we didn’t tidy up the play a bit better then and I think that, by the end, even our fans were clearing the ball off the line and trying to will us to the win.”

Reading have now failed to win in four league matches.

“It was a close game, I always thought that one goal was going to decide it,” Mark Bowen, the Reading manager, said.

“But I thought that we were lethargic and slow in starting the game.

“We should have stamped our authority on the opposition but I don’t think we did that.

“For their goal, two of their midfield runners ran past us. We were day dreaming, we were not concentrating.

“Well, I hope it’s that and not the (lack of) desire to run back. If it is that, then I’ve got to do something about it.

“We tried to come back, we got a lot of crosses into their box.

“You could say maybe we were unlucky not to equalise but, overall, we didn’t show enough character on or off the ball.

“I still thought that a draw would have been a fair result but, from my point of view, it was disappointing that we did not show enough to win the game.”