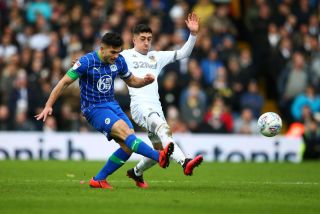 Leeds’ title-challenge suffered a huge blow as they were humbled 1-0 by relegation-strugglers Wigan.

The defeat for Marcelo Bielsa’s side saw them slip to second in the table as title-rivals West Brom beat basement side Luton 2-0 to leapfrog them at the summit.

A victory or a draw would have seen Leeds stay top, but Hernandez’s deflection past his own keeper from a Joe Williams corner inflicted a surprise seventh loss of the season.

Latics boss Paul Cook made four changes to his starting side despite a welcome victory over Sheffield Wednesday in their previous match.

Tom Pearce, 21, was handed his league debut while regular left-back Antonee Robinson did not even make the squad after his move to Italian giants AC Milan fell through on transfer deadline day.

Leeds coach Bielsa kept an unchanged side to that which beat Millwall on Tuesday night – and the Argentinian was rewarded with a bright start from his charges.

Helder Costa went close to opening the scoring after just five minutes, but Wigan keeper David Marshall made a smart point-blank block at his near post to deny the Portuguese forward.

Jack Harrison went even closer two minutes later but he struck the right post with a rasping drive.

At the other end Wigan carved out their first chance and, what would prove to be, their only chance of the opening 45 minutes.

Stand-in left-back Ezgjan Alioski powered a shot well over the bar, before Bamford scuffed a shot and Wolves loanee Costa latched on to the ball and sent a curling left-foot shot inches over.

Striker Bamford picked out Jack Harrison with a superb pass, but the midfielder fluffed his lines from close-range and the Latics cleared the danger.

Midfielder Stuart Dallas blasted high and wide as the home team kept pushing for a breakthrough.

But it was at the opposite end that the Latics scored against the run of play just before the hour mark.

Williams’ corner took a deflection off Hernandez and keeper Casilla was deceived as the ball flew over him and in.

Bamford had an excellent chance to equalise, but the striker mis-kicked and his tame shot went wide.

Midfielder Morsy powered a shot straight at Casilla as the Latics pushed to double their advantage.

However, Leeds forced the pace and Hernandez was only denied redemption for his unfortunate earlier error when his goalbound shot was brilliantly charged down in the box by right-back Nathan Byrne.

Bamford had another good chance to score, his third of the afternoon, but his header lacked power and Kai Naismith headed off his own line and the Latics got the ball to safety.

Substitute Tyler Roberts nearly made an immediate impact but he had a shot deflected wide for a corner.

Bamford had another header cleared off the line, this time by centre-back Cedric Kipre, but it proved to be a miserable day at the office for Bielsa’s stuttering charges.