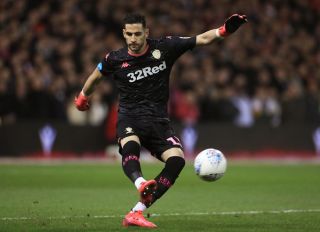 Leeds goalkeeper Kiko Casilla has been given an eight-match ban after he was found to have used racist language towards a Charlton player during a Sky Bet Championship match in September.

Casilla had denied the charge but an independent regulatory commission found the breach proven.

The Spaniard has also been fined £60,000 and ordered to attend face-to-face education.

Casilla was alleged to have made the discriminatory comments towards Jonathan Leko during the fixture on September 28.

Kiko Casilla has been suspended for eight matches with immediate effect, fined £60,000 and must attend face-to-face education after a breach of FA Rule E3(2) was found proven by an independent Regulatory Commission. Full statement: https://t.co/m9qBKY7qch. pic.twitter.com/K4XfYT7ht3— FA Spokesperson (@FAspokesperson) February 28, 2020

A statement from Leeds read: “Leeds United acknowledges that Kiko Casilla has been found guilty of breaching FA Rule E3 during our Sky Bet Championship game with Charlton Athletic in September 2019.

“However, it is important to recognise that Kiko has always denied making any racist comment.

“The FA panel have based their decision on the balance of probability rather than proving Kiko to be guilty beyond reasonable doubt, which we have always believed is the more appropriate burden of proof.”