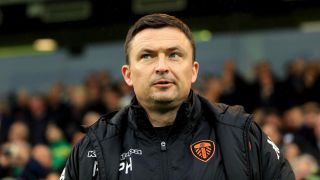 Paul Heckingbottom has been sacked by Leeds United after four months in charge, amid rumours linking Marcelo Bielsa with the Championship club.

Heckingbottom switched from Barnsley to Elland Road in February but could only lead the team to 13th place after taking seven points from their last seven games.

Bielsa is out of work after short spells at Lazio and Lille, with the Argentine appearing to fit the bill after managing director Angus Kinnear said Leeds would appoint a more experienced coach to succeed 40-year-old Heckingbottom.

"Paul came to us during a difficult period in the season and has conducted himself in an exemplary manner despite results not going as any of us had hoped," Kinnear said in a club statement.

"Our objective is to bring in a head coach with more experience who can help us reach the goals we have talked about since we became custodians of the club last summer. We are confident of making a quick appointment and we thank our fans for their continued support."

Leeds have endured a difficult 2018, having to give up on plans to introduce a new badge after a poor response from fans, while the club was criticised for embarking on a post-season tour of Myanmar.