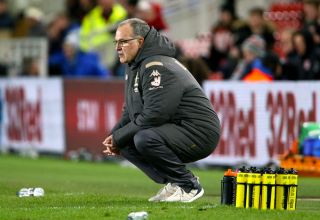 Leeds tackled their postponed Championship game against Cardiff by simulating the game on FIFA 20 instead.

The club is one of a number affected by the coronavirus pandemic, which has seen the top level of English and Scottish football suspended until April 3 at the earliest.

Table-topping Leeds were due to travel to Cardiff to see if they could take another step towards promotion to the Premier League, but instead had to settle for a simulation of the real thing.

🏟️ After a 3-3 draw earlier in the season at the Eastpoint Arena, we're heading to Cardiff today… pic.twitter.com/hHlTlYdSf3— Leeds United (@LUFC) March 15, 2020

The match racked up more than 50,000 views on Periscope, with Leeds fans getting involved by leaving comments as the game progressed.

The game started with the pre-match handshakes, which EA Sports had apparently not seen fit to update during the pandemic.

“Total disregard for the rules! Remember to take part in the @WHO’s #SafeHands challenge!” @LUFC tweeted as the players engaged in the currently-frowned upon greeting.

🤝 Total disregard for the rules! Remember to take part in the @WHO's #SafeHands challenge! pic.twitter.com/gdhNxQm4mV— Leeds United (@LUFC) March 15, 2020

In-play highlights were shared on Twitter as the game progressed, with Leeds opening the scoring through Patrick Bamford in the first half.

The broadcast also included advice on how to combat the spread of coronavirus, as well as what to do if you have certain symptoms.

A dominant display saw the Championship leaders take all three ‘points’ with a 3-1 win, a Bamford brace doing the damage.

“Get in! What a performance! 3 goals! 3 points? Who was your #LUFC man of the match?” the club tweeted.

Sadly for Leeds, the three points will not count towards the Championship table – will the two teams ever get to play the 2019/20 fixture in real life?