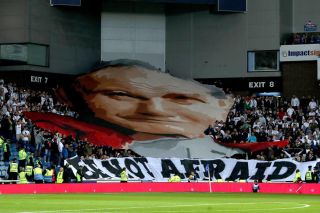 Legia Warsaw fans unveiled a huge banner of Pope John Paul II ahead of their Europa League clash at Ibrox.

The Polish supporters later unleashed a series of flares which caused the game to be halted for several minutes as smoke engulfed Ibrox.

Former Celtic goalkeeper Artur Boruc was among the visiting fans for the second leg of the play-off.

The pre-match display of the late Polish-born pontiff above a sign which read “be not afraid” came as a section of Ibrox was closed because of sectarian chanting at a previous Rangers home game in Europe.

UEFA ordered 3,000 seats to be closed off after Rangers fans were heard singing anti-Catholic songs against St Joseph’s of Gibraltar.

Bournemouth goalkeeper Boruc was seen in the heart of the away fans.

The 39-year-old once wore a T-shirt with a photo of John Paul II at Ibrox under his Celtic jersey which he unveiled after full-time.

The game was held up late in the second half after several fireworks were let off in the visiting section.

The referee temporarily halted proceedings with about 15 minutes left.

Rangers won the game 1-0 thanks to a stoppage-time header from Alfredo Morelos.

The victory after a goalless first leg in Poland sent them into Friday’s group stage draw.

The Glasgow club also face more UEFA action on Friday after being charged with sectarian chanting from their fans following the first leg in the Polish capital.