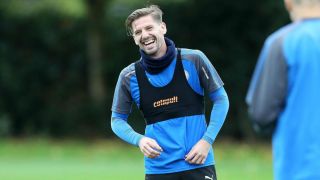 Leicester City have confirmed the signing of Adrien Silva from Sporting CP, four months on from failing to get his deadline-day switch ratified.

Sporting announced the £22million sale of the Portugal midfielder had been agreed, but FIFA rejected Leicester's application to register Silva after they reportedly missed the deadline by 14 seconds.

Attempts to appeal the decision were unsuccessful, leaving Silva to train alongside his new team-mates without the prospect of playing.

"Of course I had to stay positive. In our job, when you have a period like this it's very up and down," the 28-year-old told Leicester's official website.

"You have to keep a positive mentality and that's what I've tried to do. I keep my mind focused on my job and what I love to do.

"My team-mates have been great for me and keep pushing to keep my mentality up. They have been very important for me. I see a great future in front of us."

Silva is not eligible for the New Year's Day match against Huddersfield Town but could make his debut in Saturday's FA Cup third-round trip to Fleetwood Town.

The Euro 2016 winner started three league games for Sporting this season before the transfer saga and also helped them to book a place in the group stage of the Champions League with a play-off win over Steaua Bucharest.

Since arriving in Leicester, Silva has seen the manager who signed him – Craig Shakespeare – sacked and replaced by Claude Puel.

The Foxes sit eighth in the Premier League following Saturday's 2-1 loss at Liverpool.