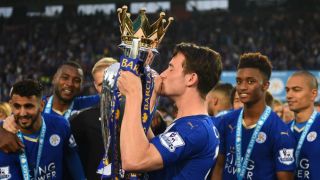 The England Under-21 international had been heavily linked with a move to Liverpool, but has now signed a deal with the Premier League champions that runs until 2021.

And, after the paperwork was completed as Leicester's pre-season base in Los Angeles, manager Claudio Ranieri spoke of his delight at retaining the 19-year-old.

"It's fantastic news for us. Ben is a player with a big future and I am very happy that future will be with Leicester City," Ranieri told the club's official website.

"Ever since I arrived in Leicester, Ben has been a young player that has shown a lot of promise. He has all the attributes you would want in a defender and shows a lot of maturity for a player of just 19.

"He has come back for pre-season in very good condition and is already showing that he is ready to push for a place in the team."

Chilwell made three appearances in cup competitions last season, either side of a loan spell at Huddersfield Town, but he is yet to make his Premier League debut.