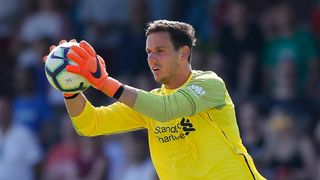 Danny Ward has joined Leicester City from Liverpool in a reported £10million deal, with speculation continuing around Kasper Schmeichel's future.

Denmark goalkeeper Schmeichel has been linked with Chelsea and Roma, who are seeking a replacement for Alisson after his move to Anfield for a fee that could rise to £65million, a world record for a goalkeeper.

Leicester City manager Claude Puel, however, has stressed Ward's arrival is to add "competition" to the Foxes squad ahead of the 2018-19 Premier League season.

"I'm delighted to be here and I'm really looking forward to the future with this football club," Ward told Leicester's official website after signing a four-year deal.

"I've come here to develop my all-round game and hopefully help deliver some more success. The club has had that in recent years and hopefully there’s more to come in the future."

Ward, who spent the 2016-17 campaign with Huddersfield Town, made two Premier League appearances for Liverpool.

The 25-year-old Wales international last featured for Liverpool in an EFL Cup tie against new side Leicester in September 2017.

"I'm very happy to welcome Danny to Leicester City," Puel said. "Pre-season preparations have started well for us and with Danny joining the group, it will give us even more competition in the squad, which is crucial for us ahead of what will be another very competitive Premier League campaign."