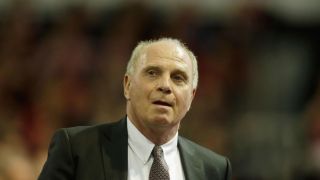 Hoeness was re-elected to his post on Friday after serving a prison term for tax evasion.

Meanwhile, Leipzig were in action at Freiberg and a 4-1 win extended their advantage at the summit to six points ahead of Bayern entertaining Bayer Leverkusen on Saturday.

Carlo Ancelotti's side ceded top spot after losing to rivals Borussia Dortmund last weekend and Hoeness feels Ralph Hasenhuttl's side can alter the landscape at the top end of German football.

"Leipzig won 4-1, now we have a new enemy besides Dortmund we can attack," Hoeness said at Bayern's AGM.

"If we are honest we had to take our motivation from ourselves in the last years. It's time some new clubs appear we can challenge.

"Leipzig are a hungry, young team; Hasenhuttl is an outstanding coach, we know him from Bayern [the Austrian closed his playing career with Bayern Munich II].

"But longer as I think about it, all the more fun I have."

There remains a vacancy on the Bayern board for the post of sporting director after Matthias Sammer stepped down due to health reasons and chairman Karl-Heinz Rummenigge again hinted former Germany captain Philipp Lahm could fill the role when he ends his celebrated playing career in Bavaria.

"There is somebody we have in mind. The name you have probably read already, but he has to play football at the moment as we need him on the pitch."