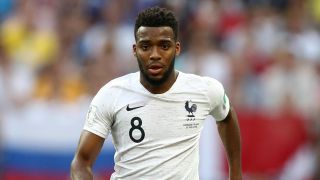 The LaLiga side beat out strong competition to sign Liverpool-linked Lemar in a reported €60million deal from Monaco.

Part of the Les Bleus squad that prevailed at the World Cup in Russia, the winger passed a medical on Friday, clearing him to train with Diego Simeone's men for the first time.

Lemar acknowledged the influence of Griezmann and Hernandez in swaying him to the Spanish capital, revealing the pair raved about the atmosphere at Atleti's 67,000-capacity Wanda Metropolitano home.

"I'm very happy to be here at a club that's going to help me improve," Lemar said in a club interview.

"It's a positive to already know some of my team-mates. Before coming here, they spoke to me about the club and helped me make my decision.

"They'll surely help me integrate into the team, [which is] full of quality.

"I really want to see the stadium. Antoine and Lucas have talked a lot about it and its atmosphere with me when we were with the national team."

Quite an eventful day for Lemar! He passed his medical bright and early and trained as an Atlético for the first time! July 27, 2018

Atleti have also reinforced with the additions of goalkeeper Antonio Adan, midfielder Rodrigo and Portugal winger Gelson Martins as they attempt remain in title contention with champions Barcelona and city rivals Real Madrid.

Simeone led the club to second place in LaLiga last season, along with a Europa League triumph, and Lemar is excited to work under the Rojiblancos boss.

"I think he's a great coach. We know what he's done with Atletico," the midfielder said.

"He's going to help me improve and take the next step in my professional career, which is all I ask."