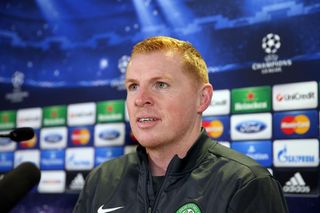 The Scottish champions are yet to score in Group H, having been beaten by Milan and Barcelona at San Siro and Celtic Park respectively.

Lennon is hopeful that playing at home will offer his side an advantage as they target their first points of the group stage against the Dutch side, who sit third with one point.

"We will change the way we play that we did against Barcelona as we should have a fair share of the ball tomorrow night," he said on Monday.

"The onus is on us. We are at home and we have to impose ourselves on them and how we want to play."

Celtic were beaten by two late goals in Milan before a Cesc Fabregas effort 14 minutes from time handed Barcelona the points in their last European outing.

While Ajax are also yet to win in the group, Lennon is aware of the task his side face on Tuesday.

"We watched them on Saturday night (a 1-1 draw with Twente) and they came on strong in the second half, they probably deserved something out of the game.

"I have watched them twice now, they don't change their formation but do with personnel. They are very confident and have great belief.

"They are a typical Ajax team, (with) a philosophy they have had for a long time. They have a wealth of experience in the background

"(Coach) Frank (de Boer's) CV speaks for itself. He's turning them into a force again, although they lost a few significant players in the summer."

Lennon will be without Kris Commons for the tie due to a hamstring injury although Emilio Izaguirre is likely to recover from a virus while Mikael Lustig is in line to return from a hip injury.

On Commons, Lennon added: "We are hoping it's not as bad as a tear but he will be out for tomorrow.

"He may make the corresponding game in Amsterdam. He's been for a scan, and we're awaiting confirmation.

"Emilio will be fine, Mikael we will assess tomorrow but we're pretty hopeful he will be fit."

Joe Ledley is unlikely to feature, despite returning to action for the final 22 minutes of Celtic's 1-1 draw with Hibernian on Saturday.