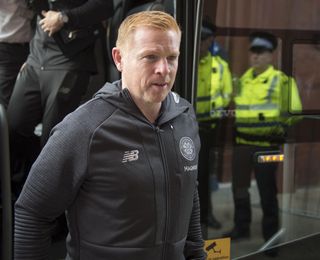 Kilmarnock left-back Greg Taylor was followed by teenage defenders Jeremie Frimpong and Lee O’Connor to make it 11 signings across the window.

The Celtic board came under fire following their Champions League exit against Cluj, when Lennon started with summer signings Christopher Jullien and Boli Bolingoli on the bench and midfielder Callum McGregor out of position at left-back.

But there was an upsurge in positivity among the Celtic faithful following the arrival of Southampton winger Mohamed Elyounoussi on loan and Sunday’s Ibrox victory, before chief executive Peter Lawwell got three deadline-day deals over the line.

After collecting the Ladbrokes Premiership manager of the month award, Lennon said: “I think it’s a very good window.

“Very pleased to get Mo in, another attacking option. Greg was a little bit prolonged but we got the deal done, and the two young lads, Lee and Jeremie, will be ones for the future. But with the talent they have, they could make an impact this season. So we are very pleased with the business we have done.

“The club is united, let’s get that right. There’s been a lot of sniping but we stayed very strong on it and composed and knew what we wanted to do.

“These things take time but the window has closed and I am very happy with the quality of the squad, the players we have brought in and the players we already had.”

Taylor, 21, will provide competition for Bolingoli following the departure of £25million left-back Kieran Tierney to Arsenal.

“He is hungry to be here, you could see that in his interview,” Lennon said. “In the last couple of seasons he has been one of the most consistent players in the country and we are delighted to get him on board.”

The pair joined another two teenagers who moved from England to Parkhead during the summer, Irish youth internationals Luca O’Connell and Jonathan Afolabi.

“It’s important that we try and find these players earlier with the way the market is now,” Lennon said.

“It’s certainly changed since I was last here. We are just trying to be a little bit ahead of the curve if we can.

“It’s very difficult to get the level of player for the money that we have but if these four come in and develop and progress the way we want them to, then we think we’ve got real talent.”

Lennon praised Nicky Hammond for his “absolutely huge” role in the transfer window after the former Reading and West Brom director of football was brought in to help with recruitment over the summer.

Lennon added: “He has worked tirelessly, he has been here, there and everywhere, he has been around Europe looking at players, meeting agents, club representatives, talking to people on the phone constantly. He is so diligent.

“I have enjoyed working with him the last few weeks and we have had a good week and everything starts to look even more promising. The players we brought in, a lot of it is down to his hard work.”

Lennon admitted they had to fend off interest in players but one player he was happy to send out on loan, defender Jack Hendry, ended up staying.

“There were other parties that might have intervened or interrupted the process,” Lennon said.

“We will work away with Jack and get him up to speed, he has been out for a long time with injury. It’s going to be difficult for him but it’s down to him to take it head on.”