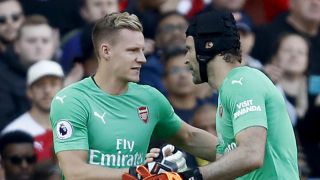 Bernd Leno has retained his place in goal for Arsenal's Premier League clash with Crystal Palace despite Petr Cech's return to the matchday squad.

Veteran gloveman Cech is available again after missing a month with a hamstring injury, but Unai Emery has kept faith with Germany international Leno as the Gunners seek a 12th straight win in all competitions.

Emery makes two changes to the team that beat Leicester City 3-1 on Monday with Pierre-Emerick Aubemayang joining Alexandre Lacazette in attack as Stephan Lichtsteiner and Henrikh Mkhitaryan drop to the bench.

The Arsenal boss confirmed to Sky Sports that midfielder Granit Xhaka would continue in an unfamiliar left-back role against the Eagles, who have lost each of their last three Premier League fixtures.

Kick-off’s an hour away, so that means it’s time for team newsHere’s how we line up against October 28, 2018