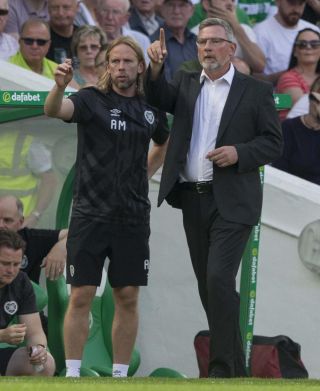 Craig Levein insists Hearts’ penalty practice made perfect as he hailed the attention to detail of his assistant manager Austin MacPhee.

The Jambos boss revealed that MacPhee ensured the Jambos stars worked on spot-kicks in training ahead of the shoot-out victory against Aberdeen, just as he did before the Betfred Cup semi-final defeat against Celtic last October.

That diligence paid dividends last night as Glenn Whelan, Michael Smith and Aidan Keena dispatched nerveless efforts to send Hearts to Hampden, where they will face Rangers in the last four.

Aberdeen, by contrast, missed all of their kicks, with Sam Cosgrove, Niall McGinn and Bruce Anderson the culprits.

Levein lauded: “I don’t know if I’ve got any energy left to celebrate that win! I said before the game it would be tight – it always is – and it went right to the wire.

“But we’ve been practicing penalties with Austin [MacPhee] since before semi-final last season at Murrayfield.

“All credit to him, he was working on it in case we got in a similar situation and I’m delighted for the boys that they come through it.

The tie was decided from 12 yards following a breathless 120 minutes under the lights at Tynecastle.

Sam Cosgrove scored two penalties in normal time – a cruel irony given he would go on to blast over the bar during the shootout – following clumsy fouls by Christophe Berra and Loic Damour.

Steven MacLean and a last-gasp leveller from Craig Halkett sent the encounter into extra-time, during which McGinn rattled the post with a close-range header.

Levein added: “We spoke extensively about not doing anything silly, not giving them any goals – then we gave them two goals.

“I don’t know how much longer they can do that and me still be breathing!

Meanwhile, Derek McInnes conceded that the bizarre scenario of taking three penalties in one match may have factored into Cosgrove blasting his effort over the bar during the shootout.

McInnes said: “It’s unusual to take three penalties in a game. Maybe Sam was undecided as I’ve never seen him take a penalty like that – but there is no blame on him or anybody else.

Cosgrove was magnificent in the first half and led the line brilliantly.

“There was an inevitably about the extra-time as both teams looked dead on their feet. And we have good penalty takers and I was confident but it wasn’t to be.”